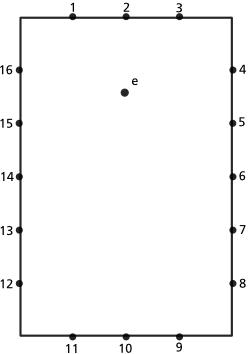 16 wall nodes and one emitter.

2nd order reflections
Is calculated the same way as the 1st order rendering but with each node acting as a receptor and the stored 1st order values and nodes are used as emitters.

Of course, if a receptor don't have a free line-of-sight to an emitter (or nodes acting as receptor/emitters), for example they belong to the same wall, that pair shouldn't be calculated.

All the reflection steps (1st, 2nd and so on) are calculated first then the final impulse is rendered using them as input, so that the result of the reflection steps can be reused to render multi-channel impulses. I just interleaved the steps to make the explanation clearer (I hope!).

Is this completely bonkers?

by dahnielson
OK, maybe the radiosity-like approach described above is a bit overkill. I've been figuring out the trigonometry for calculating the first, second and third order reflections, not a math wiz really.

by dahnielson
I'm starting to get IRs by intuition. Here's a fun experiment anyone can do:

* Open up your favorite sound editor.
* Create an empty one second mono file.
* Use the draw tool to draw single samples.
* Draw one or two samples with big positive values far apart.
* Save it as WAV.
* Load it into a convolution reverb (do an equal dry/wet mix) and play something like a piano through it: the effect will most likely be of a delay echo.
* Go on and manually create new IRs and play with the convolution.

Of course the result is what you expect if you understand plotting IRs with pen and paper to analyze a room.

Edit: Clarified some of my reasoning.

So IRs are just comb filters on steroids?

by Consul
That's not a bad description. You might also think of them as being custom comb filters specifically modeled on a room or a piece of hardware, since, in theory anyway, a bunch of comb filters can do anything any other kind of filter can do (assuming you make your comb filters with very short delays). It's all just clever manipulation of delay lines in the end. The difference is, a room's impulse response is ready-made for convolution, whereas the impulse response from a piece of gear like an EQ, a microphone, or a guitar cabinet, needs a bit of massaging first due to how it's generated.

I'm not that great an expert, but this is what I gleaned from reading my copy of the Csound Book, which is chock-full of DSP theory written in an accessible way.

by dahnielson
Yes, I should give the Csound book a good read (only previously browsed it). But it's fascinating how easily you can synthesize various IRs and get great sounding result while not necessarily simulating anything particular.

by Consul
You just gave me an interesting idea about how to model/simulate a guitar cabinet, actually. It involves a pair of very short comb filters plus the IR response of some birch plywood. I'll post more later, as I now need to drive down to another university to see about transferring in next year for my degree.

by dahnielson
A fun application would be to let the user draw the impulse response in a waveform monitor, generate a input tone in another waveform monitor (like a sinus wave of a specific frequency) and show the convolved output in a third waveform monitor.

by dahnielson
* Just to keep a reminder of it somewhere:

* An increase of 10 dB is perceived as a doubling of loudness.

* The Nyquist frequency is half the sampling frequency.

* Sound intensity from a point source of sound will obey the inverse square law.

* Two traveling waves which exist in the same medium will interfere with each other (constructive/destructive interference).

(That HyperPhysics site is gold. Kudos to Lowkey who made me google "refraction of sound" that led me to it!)

by Consul
I just commented on the speaker/cabinet simulation bit in my original amp sim thread, so I don't take this one off-topic, which I am now doing with this post.

Oh, those are handy equations to have. Thanks!

by lowkey
Could light refraction formale be used? Although light is faster than sound they are still waveforms.
All times are UTC+01:00
Page 2 of 3